The Valley of the Gods. How can you not be intrigued to visit a name that sounds like it belongs in the fertile lands of the Nile River?

While you won’t see any pointed pyramids in this desert valley in Utah, you’ll be graced with a kingdom filled with isolated buttes and towering pinnacles amidst the wide open spaces.

This is one of the many places to visit in Utah on an American southwest road trip off-the-beaten-path but is only an hour north of the spectacular Monument Valley – a must not miss USA attraction.

It’s also quite similar to Monument Valley, although not as dramatic and doesn’t have the same spiritual magnetism. But to be fair, that’s on a whole other level in Monument Valley.

Is the Valley of the Gods worth a visit on your American Southwest road trip?

The Valley of the Gods is worth a look if you are traveling slowly in Utah. It does offer a much quieter and more remote experience than Monument Valley.

Plus, it’s free and you can find some isolated camping spots for true serenity under starry skies. 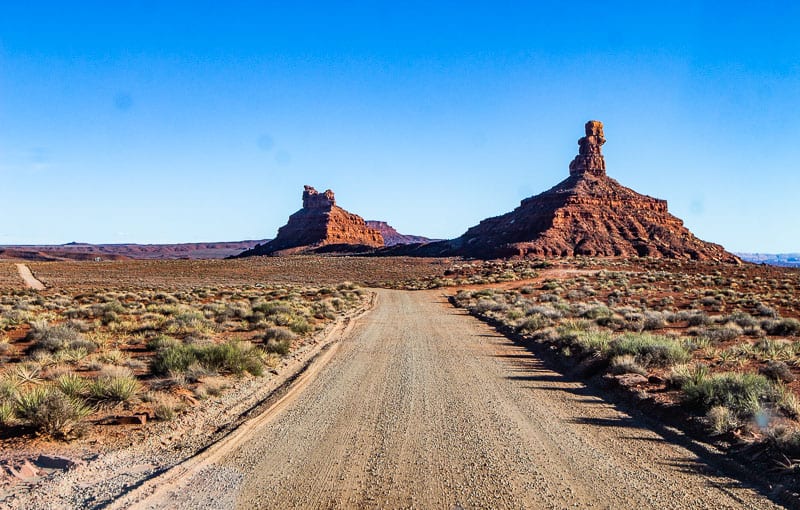 We found a little nook off the side of the road to free camp for a couple of nights. It would have been longer had we’d been able to get internet connection – two days offline was all any of us can manage running a business.

In the Valley of the Gods we LOVED the expansive views we had all the way back to Monument Valley where we had just come from.

The rocky cliffs surrounding us made the perfect playground for the kids.

If you have loads of time and just want a peaceful experience in a stunning location, I’d recommend camping in this spot for several days and just enjoy the views. This is the kind of place it is.

Gazing out at those views made it something special.

Valley of the Gods Scenic Drive

While it’s bumpy in spots, you can do this drive in a 2WD. Go slowly.

The colors and rock formations in the Valley of Gods are stunning. there are no real hiking trails here, which I actually enjoyed for a change.

There are loads of free camping spots, but you are better entering from the east side (US-163), as the west could be pretty rough for some RVs to get through on that road.

We all agreed we probably wouldn’t have towed our 37-foot travel trailer through, or would have stressed about doing some damage.

Take the drive and find a pullout off the side of the road and your perfect camp spot.

If there are a few of you, you may want to send someone ahead to scout it out. The smaller rig in our crew did just that.

There is no Wi-Fi so they had to come back and get us, but it worked better than us not knowing the road conditions properly and getting stuck. 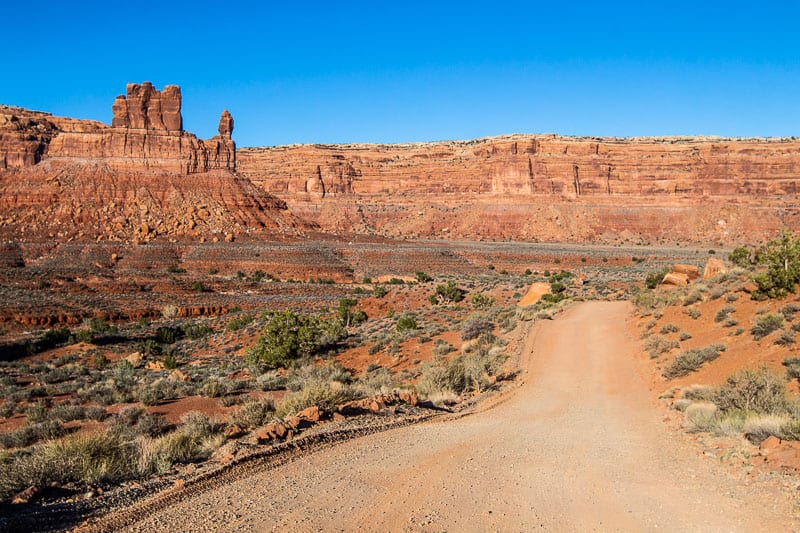 We drove a couple of miles in until we found a lovely secluded spot on the left hand side, it was just on the beginning of the bend in the road where it starts to loop around to the west.

Our campsite was nestled into the cliffs so were beautifully protected and secluded and felt like we were the rulers of the kingdom, especially when we climbed up to the top of the cliffs.

If you have kids and camp in this spot, be vigilant about them being on the road. Cars can come around the bend really quickly and they will not see your kids in time.

You can see the conditions of us driving in from the east side in our video:

Where is the Valley of the Gods located?

If you are traveling between Moab and Monument Valley, the Valley of the Gods is easy to get to. It’s only about 32 miles from Monument Valley on the Utah/ Arizona border. 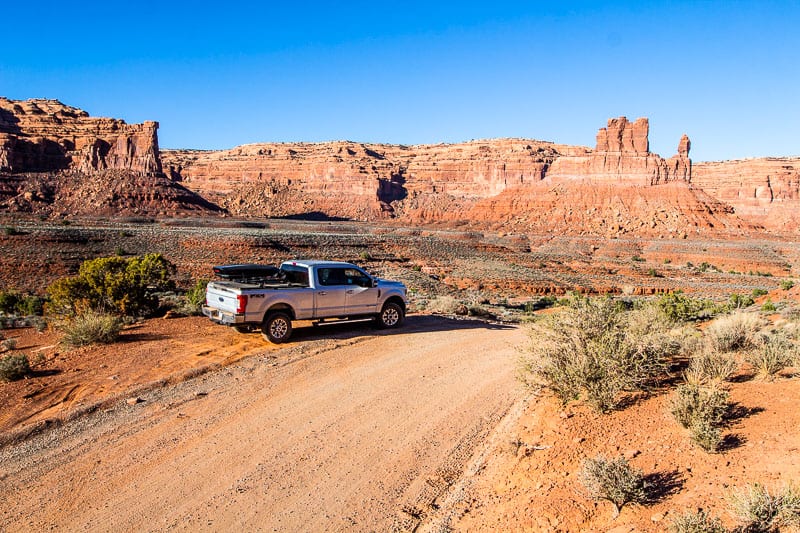 Drive north along the US-163. Be sure to stop along the way and turn back to get the classic Forest Gump picture of Monument Valley behind you.

If you’re driving into Monument Valley from the north you won’t miss it. We drove up from the south so had it behind us. I was not paying attention, nor did not realize this was the classic photo moment and so we missed it.

Craig and I had captured it way back in 2006. Would have loved to have got it this time around.

Just north of Mexican Hat is the entrance to the Valley of the Gods on the US-163.

There is also the other other entrance on US-261, which is where we entered when we did the scenic drive coming from National Bridges National Monument to return to our campsite (more on that below).

The town of Mexican Hat was about 20-minutes from our campsite.

It’s a tiny town so you won’t find too much. You’ll have to be completely self sufficient to stay here and there will be no internet (mostly).

The boys in our camping crew did pop down into town to watch some sports and were happy enough with the food at The Swingin Steak, the local pub there, but it was very quiet.

45-miles away from Valley of the Gods lies another spiritual wonder, sacred to the Hopi and ancestral people who occupied this complex system of canyons from about 500 BC until around AD 1270.

Some of the cliff dwellings of the later Ancestral Puebloans can still be seen today.

Natural Bridges National Monument is another one of the off-the-beaten-path things to do in Utah and has three natural bridges, Kachina, Owachomo, and Sipapu.

Unlike arches, bridges are formed when streams out through canyon walls.

You can visit by way of a one way paved 9-mile scenic drive with view points. Bridge View Drive leads to overlooks and trailheads above the three bridges that are the park’s chief attractions.

Or, you can hike down to each one. All three bridges are accessible by short, steep, hiking trails.

There is a loop walk (10 miles) you can do that connects each natural bridge. That’s one to come back for, perhaps a bit too much with the kids.

It’s a very easy place to visit in just a few hours and makes a great day trip from the Valley of the Gods.

Don’t forget to grab your Junior Rangers book before exploring the Natural Bridges Monument so the kids can do their activities and get their badges.

You can access the monuments with an America the Beautiful national parks pass, which gives you access to more than 2,000 federal recreation sites across the United States for an $80 annual fee.

Sipapu Bridge is the second largest natural bridge in the world. In Hopi mythology Sipapu means the gateway entryway their ancestors came into this world.

It’s difficult to spot from the canyon rim overlook as it blends so well with the surrounding canyon rocks. As it’s so high it has very little stream erosion.

We hiked 1.2 miles return down into the canyon to Sipapu Bridge, which was a short adventurous hike that involved a few ladders and plenty of views along the way.

The trail winds along cliff walls which gives sensational views of the White Canyon below. I loved the shady overhang spots and the forested sections of pinons and juniper trees.

Down the bottom you’ll find a small creek lined with cottonwood trees. Pack your picnic and eat under the shade of the bridge by the river. It offers a great perspective of the size of the sandstone natural bridge arching across the sky.

We really enjoyed this hike, and only had time to do the one. I think this would be the pick of the bridges to hike to if you are short on time, or only want to hike to one natural bridge.

The easiest hike is to the last bridge, Owachomo. It’s only a half mile round trip.

Owachomo means rock mound, a feature on top of the bridge’s abutment. Owachomo is the oldest,smallest and thinnest of the bridges and is no longer eroded by water but frost and seeping moisture continues to erode it.

Whatever else you do, leave a little time at the end of the drive and walk the half-mile trail to stand under its massive span.

Kachina Bridge is the youngest of the three and is quite big and bulky. Floodwaters passing through White Canyon continues to erode and enlarge the bridge span.

Kachina is named for the petroglyphs on its side that resembles the symbols commonly used on kachina dolls.

You can hike 1.4 miles return to stand beneath the widest, and probably youngest, natural bridge in the park. You can see Kachina Bridge from the viewpoint.

How to Get to Natural Bridges National Monument

Natural Bridges National Monument was 45 miles away from our Valley of the Gods campsite.

It was worth the trip, especially the incredible drive up Utah 261 the escarpment via a bunch of very tight switchbacks which was a thrill we weren’t expecting. (not suitable for RVs! Go via UT-95 instead)

Just another reason to love Utah.

The national monument is located in southeast Utah, off scenic Utah 95 via Utah 275.

We came back into Valley of Gods from the West entrance after our visit to Natural Bridges. (see map)

We changed our plans to access Capitol Reef National Park from this direction, once we realized the condition of the roads and getting our trailers up to the top of the mesa there was probably not the safest option.

Beside the weather was not favorable for Capitol Reef at that time so we delayed it until after Moab.

More Places to Visit in Utah

More Places to Visit in the American Southwest