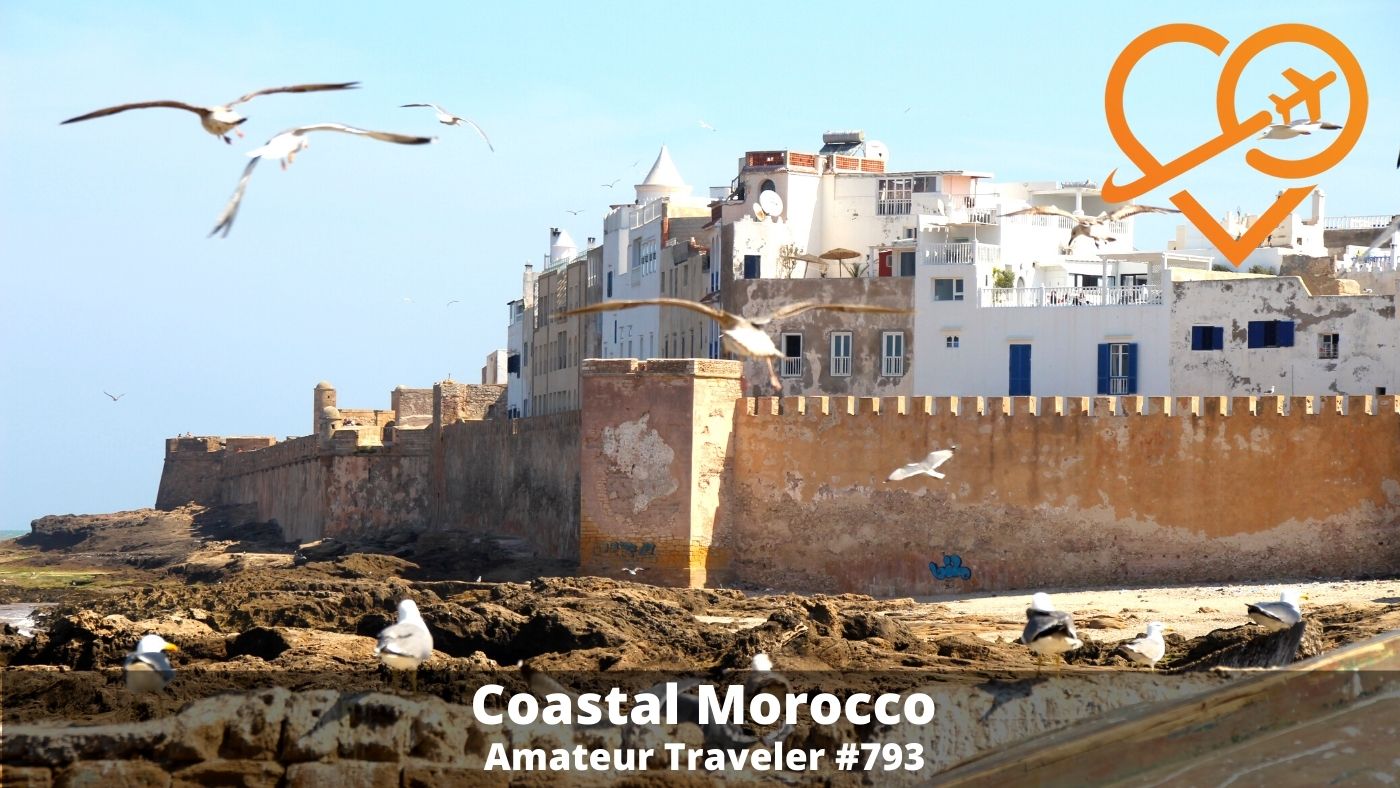 Hear about travel to the Atlantic coast of Morocco from Casablanca, thru Essaouira, to Agadir as the Amateur Traveler talks to Amanda Ponzio-Mouttaki  from marocmama.com about this country she calls home.

Amanda says, “I think that Morocco is one of those destinations that is on people’s dream list. It’s someplace that seems really inaccessible, when in reality, it’s just as easy as getting to Europe. ”

“It’s a country of contrasts.You’re gonna get to experience everything. It can be as normal as you want it to be like. I live in Marrakech and I can go and do whatever I would do in any city around the world or it could be as unique as doing something wild that you never thought of like sleeping under the stars in the Sahara Desert.”

“We have every single climate zone we have cities, country, mountains, snow, ocean lakes, literally everything that you can imagine actually exists in Morocco.”

Amanda first came to Morocco in 2003 where she met the man should would later marry. The moved back to Morocco in 2012 so that their kids could learn Arabic and French. What has planned to be a one year trip has become indefinite. They started running food tours in Marrakesh and have expanded that to other Moroccan tours.

Amanda lays out an itinerary on the west coast of Morocco. She starts us in Casablanca which has the best international connections. She warns us that the city is nothing like the city in the Bogart movie of the same name, but she does recommend a few sites to see.

The Hassan II Mosque is one of the largest mosques in the Islamic world. It’s a beautiful piece of craftsmanship that was only built at the end of the 20th century. It was built by contributions from everyday Moroccans. It’s one of the only mosques in the country that non-Muslims can enter. It also has a hammam, which is a traditional Moroccan bathhouse.

She recommends the Quartier Habous which is a neighborhood that was built by the French in a quasi-Orientalist style. They built it how they thought Morocco would look. She recommends browsing in the small shops and stopping at a specific local bakery.

From there we head south on the coast to El Jadida which has a large fortress built by the Portuguese and an unusual and hauntingly beautiful old cistern which lay hidden for centuries.

All along the way Amanda, who is a foodie, points out her favorite restaurants and places to stay. Oualidia is known for its oysters but is also popular with birdwatchers who enjoy the diversity of migrating birds who come through Morocco.

Safi has another Portuguese fortress and is a center for colorful Moroccan pottery.

Essaouira is Amanda’s favorite city on the coast. This 18th century fortified town has a beautiful small medina which is a UNESCO World Heritage site. Explore the port with its bright blue small fishing boats and stone walls. Stay in a traditional Moroccan riad or in the more modern town by the beach.

Sample the local argan oil or head out into the countryside where you can see goats climb trees to eat the argan nuts.

South of Essaouira you can find popular surf towns like Tamraght and Taghazout. Tamraght has the nickname Banana Village because it has a microclimate that produces tropical fruit such as bananas.

Agadir is a more modern city where you can find all inclusive resorts. From here you can head inland on the toll road which will return you to Casablanca.

The Atlantic coast of Morocco is worth a visit. It offers a laid back and welcoming introduction to this fascinating country. Although beware that you, like Amanda, may find this country hard to leave.

This episode is also sponsored by Green Chef, “The #1 Meal Kit for Eating Well”. Go to GreenChef.com/traveler130 and use code traveler130 to get $130 off, plus free shipping!”

This episode is sponsored by Cal-Am. With 12 properties across Arizona, Cal-Am Resorts offer experiences designed just for older audiences. Unlike a time share, you buy a home allowing you to come whenever you want and stay for as long as you want. Call Steve Ryerson at 888-883-4609 or visit discovercal-am.com. 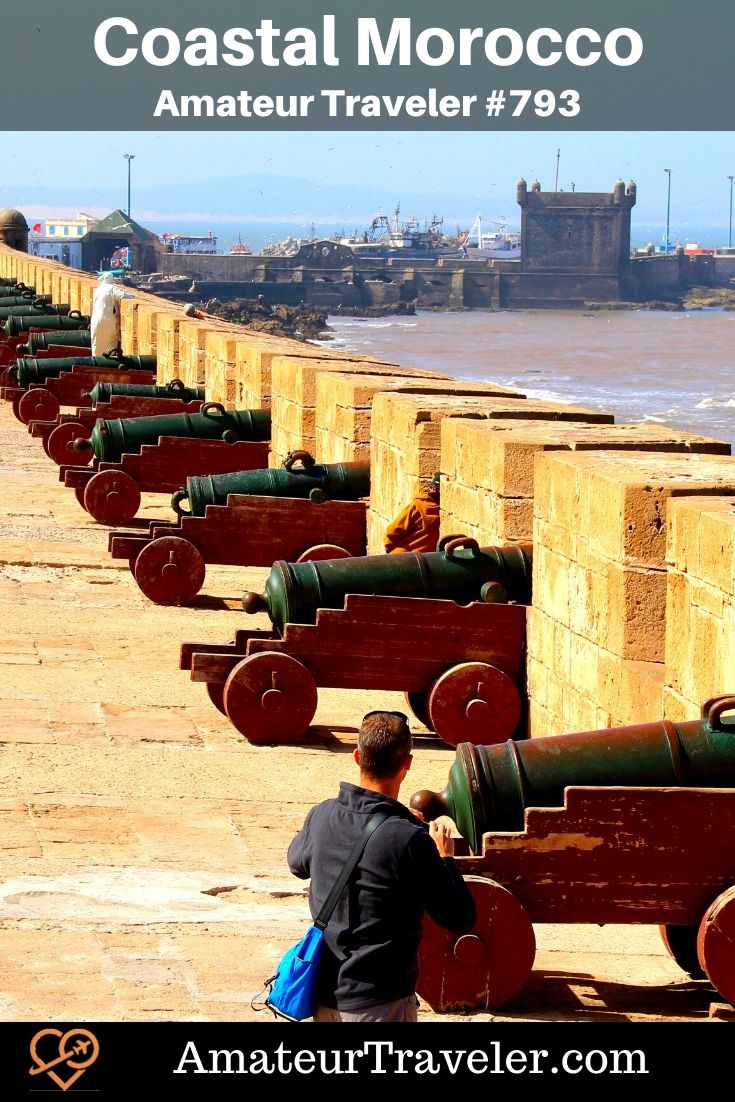 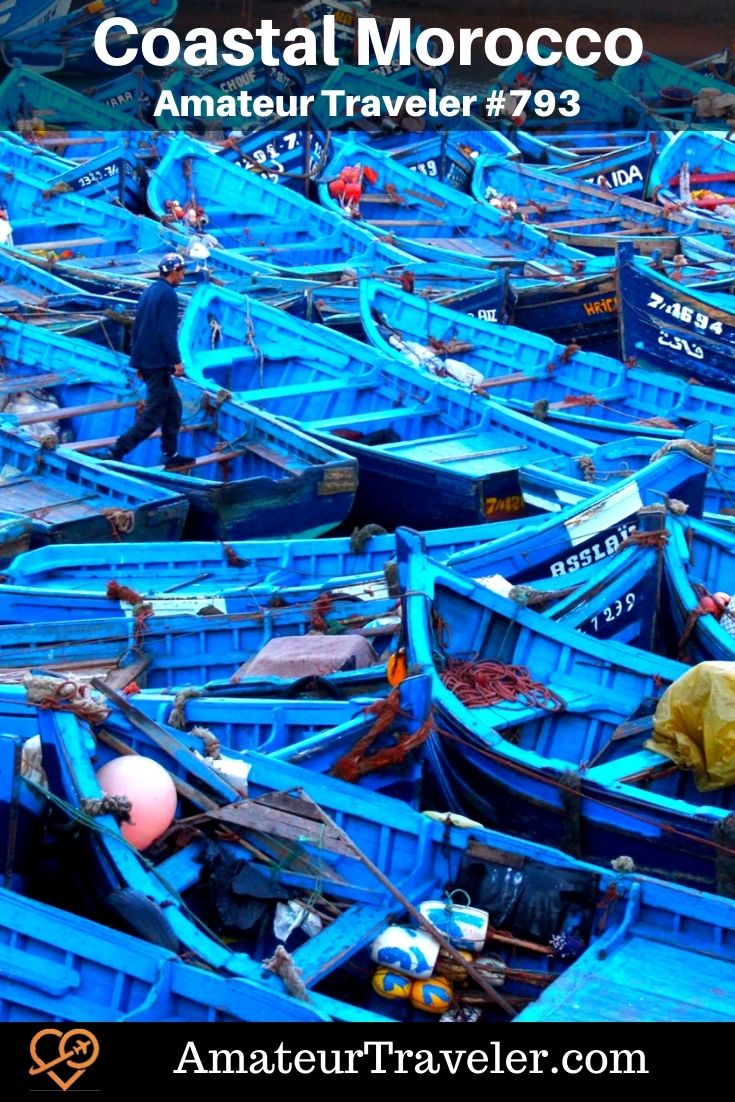